We read on Change is Hard about Walktober. Well it just happens that we took a walk to downtown Ottawa on the first weekend of October.  We went down to see the new Holocaust Monument that was just dedicated last month here in Ottawa.

Ottawa has a lovely a path system from one end of the city to other. It is called the Ottawa River Pathway and the lands are owned by the National Capital Commission. The Ottawa River Pathway is 31 kilometers long, that's 19 1/4 miles. Of course, we didn't walk the whole thing; we drove downtown and parked near the monument and after we visited the monument we then walked part of the pathway. 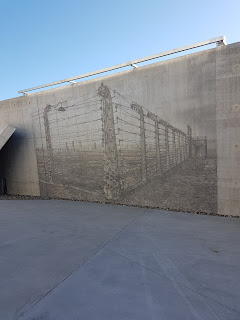 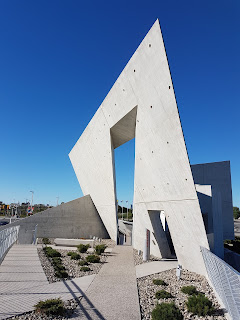 It's a pretty stark and solemn monument, I guess it should be that way.  It makes you feel like you should be quiet and reflective. I think even Beckett and Keltic felt that way; neither barked while we were there.

After visiting the monument we walked over behind the War Museum and started our walk on Ottawa Multi-Use pathway. It's a paved pathway for walking and cycling, rollerblading too if you want. 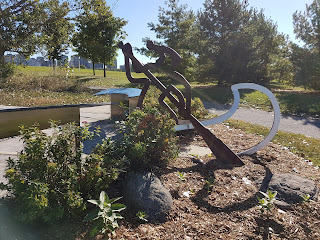 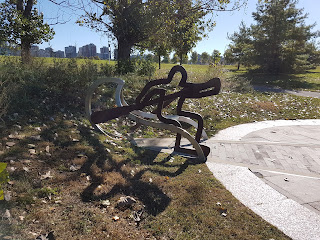 On this part of the pathway there were sculptures and plaques telling you about the history of the river. This sculpture is of voyageurs in their canoe. The river was used as the main means of transport in this area for fur traders and explores. 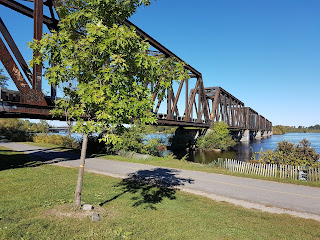 We stopped at this old train bridge for awhile before turning back. There hasn't been  a train on it for many many years; you used to be able to walk on it to cross over to the islands but it got dangerous so the city fenced off the access.

That's a problem with the river pathway is that it is linear. You have to decide how far to walk and then you have to turn around and retrace your steps but it's funny how you notice different things even though you've passed that way before.

We had noticed this sculpture of a firefighter on our way over to the Holocaust Monument so we crossed  the street on our way back and found the Canadian Firefighters Memorial. 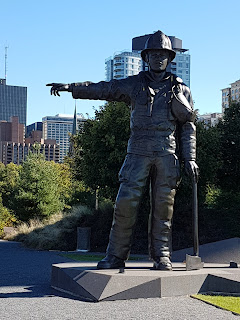 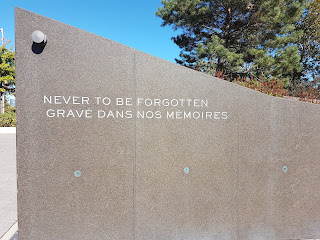 I hadn't even known that memorial was there, guess I have to get out an explore our city more often.

All in all we walked for almost two hours, that's the free parking limit on weekends. Where I was parked I don't think it would have been a problem if we were longer but wouldn't want to ruin such nice day with a parking ticket now would we?

Won't you join us for Robin's Walktober?