I guess you really don't need things to help you remember but I can't help but put together a few things in remembrance of the dogs I have loved and lost.  In addition to having a memory stone, I also have a memory box for each of mine. It started because when Duffy and Gryffon passed their ashes were returned to me in a plastic bag wrapped in tissue in a gift box. At the time, photo boxes were easy to find so Duffy's, Gryffon's and Ceilidh's boxes were store bought. I glued on one of their metal dog tags to Gryffon's and Duffy's, Ceilidh's came with the flowers. Gryffon's tag says Born to Be Wild and Duffy's says Most Loved Dog. 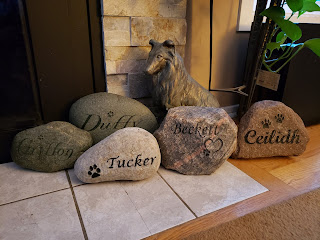 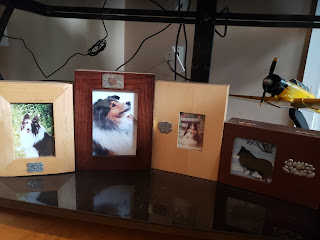 Well, that was in the days of film and printed pictures; so when Tucker passed I wasn't able to find a photo box as photographs were mostly digital. My dear friend and neighbour, Julie made me a box for Tucker. For Tucker's box, I bought a metal dog tag that has a heart with wings and his name is engraved on the heart. It's the second box from the left in the picture above.

Julie was one of the people I messaged when I was waiting at the vet's office with Beckett on that sad day.  She offered to make me a box for her "little buddy".  It took me a while to get everything together. Today I went and had some photos printed at Walmart to finish off the memory box.  In Beckett's box are his CKC registration, his Agility Trial Champion of Canada medallion, his baby collar, two other special collars, his garden flag and a little brown paper treat bag from his 9th birthday shopping trip.


Beckett's box is done with a beautiful inlay around the lid.  I almost didn't want to put anything on it but in the end I did; Beckett's box has his Momma's Boy dog tag on the corner. 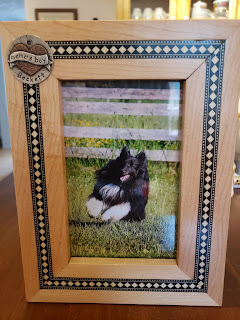 The picture on the lid of Beckett's box is from his second try at herding.  He passed the first time round but there were no photos, at least no good ones taken that first time.  The second time he went, a photographer, Erika had a photo shoot at the same time as the herding test.  Beckett always looked either so serious or very focused in most of his pictures, this one shows his joy. It's one of my favourite pictures of him. It's how I'll always remember him.