As we all know in these pandemic times traveling isn't easy to do and likely won't be for awhile. One of the retail outlets that was considered essential throughout all of this was our liquor stores so I started looking through my local store at wines from other countries. When I started posting the pictures of the wine I was having with dinner, my brother jokingly asked if I was doing a world tour.

But that got me to thinking about food from various parts of the world. You might have read in my blog about the dinner I hosted for my sister and brother-in-law (my bubble) based on The Ivy Restaurant in London.   I made a special dinner for myself from Scotland for Robbie Burn's Day of stacked neeps and tatties. I used hamburger for the base rather than haggis. 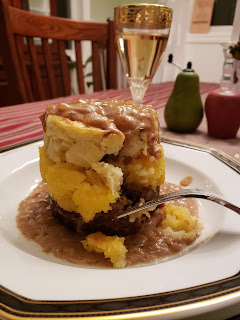 I also made for the first time an Acadian Meat Pie. My mother always called them "tourtiere" but I've since found out that tourtiere use ground meat while my mother's recipe uses chunks of meat. Many Acadian meat pie recipes call for potatoes but my mum's only used chicken, pork and steak. I used just chicken and pork for my meat pie. It's a Christmas tradition to have meat pie; in our home we always had it on Christmas Eve; when I was much younger it was a late night meal after Midnight Mass. 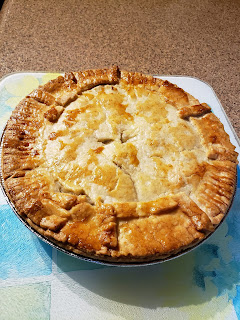 My last job before retirement had me as the Canadian Forces' representative to NATO for explosives safety so I got to travel a bit for work. One of the places I went to was Rome, Italy, I'm not a huge fan of pasta in fact I ate at my first Hard Rock Cafe in Rome just to get away from pasta. One thing I really did enjoy was the tortes that were on the breakfast buffet. One I especially liked was a chocolate and pear torte so of course I had to give it try making one. It didn't turn out too bad if I have to say so myself. 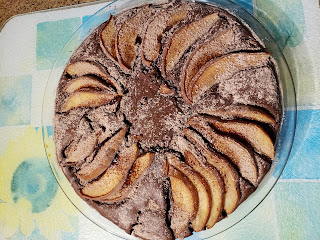 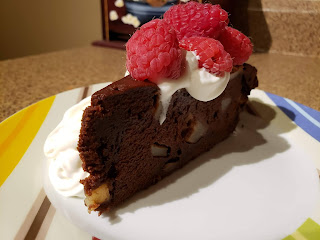 Another dessert I made was for our Thanksgiving shared dinner. I ate dinner at my sister and brother-in-law's house but we shared the meal with my neice and her family and had a video chat over dinner. My contribution for the dinner was Sambuca Shrimp and Swedish Crustless Apple pie. 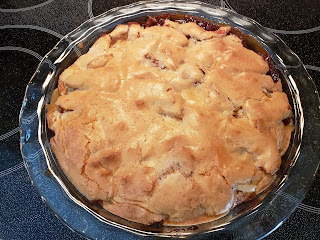 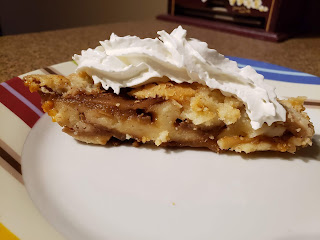 But back to wine, one day I had a white wine that was from South Africa so I looked online to see if there was a relatively simple dish I could make and came up with Bobotie. It's a curried ground beef dish and was quite good. 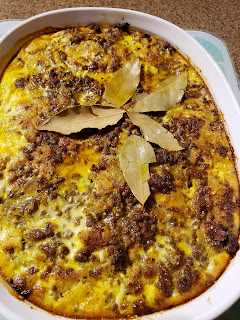 This past week, I had a wine from Chile so I again decided to try and find a Chilean recipe and came up with this corn and ground beef casserole, called Pastel De Choclo. It was very good, the savory and sweet tastes went well together. 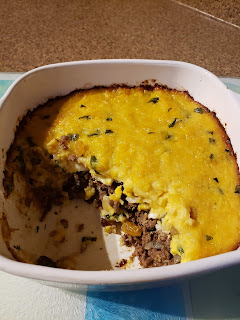