So 2019 didn't end the way I expected but isn't that the way of life; two days before Christmas I had to let my Beckett go.  He had stopped eating much over the weekend and Monday morning his gums were really pale; I called over to my vet's office and got in for an appointment that same morning.  Beckett had a large tumour in his abdomen and the prognosis, even with surgery, was that he would only have a few weeks. I had made the decision  even before we had the x-ray results, that if it was a tumour, I would let him go. In the Canine Cancer group, there is a saying: "Better one day too soon than one day too late";  he wasn't in distress and was able to go peacefully in my arms. But this blog post is about Beckett's life not his passing.

Ever since I first saw my first bi black Sheltie I was hooked and since then I've always had one sable and one bi black.  In 2009, Tucker, my sable was nearly nine years old and Ceilidh, my bi black was only six; so when I started to look for a Sheltie puppy you would have thought I'd be looking for a sable but I found this available bi black puppy on a web site. 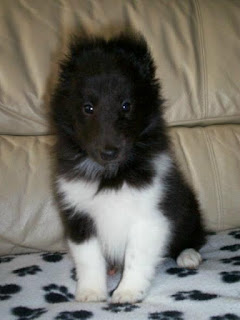 I posted the picture to FaceBook and my niece commented about whether I wanted a third dog. I replied I've already decided on a third dog but should it be a bi black; it wasn't much of a decision and I quickly arranged his purchase with the breeder. I picked him up the Saturday of Labour Day weekend.  My father was up visiting, I drove him, Ceilidh and Tucker to my sister's place in Kingston and drove on to Oshawa to get Beckett. We stayed overnight at my sister's and drove home to Ottawa on the Sunday.  My dad and I took the dogs to the park on Labour Day Monday where little Beckett played with an 8 month old Sheltie. While playing, I think the other Sheltie stepped on his leg and he came back to me holding up a leg and crying.  Off to the animal hospital we went; my dad and I spent five hours waiting to see the emergency vet and for X-rays to be taken.  Initially they said it was just dislocated but when the radiologist looked at the X-rays, the diagnosis was that it was a break, a clean break so no surgery but just a splint for 6 to 8 weeks. Beckett was a little trooper and got the nickname Brave Beckett. He was in the splint until after our Thanksgiving in October. 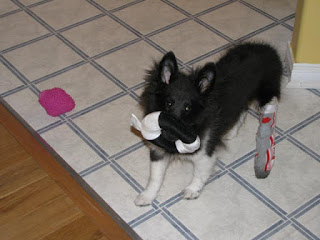 Then in January 2010, on New Year's Day, I was putting Ceilidh in the car and felt what I thought was a large mat of hair on her upper inner thigh. When we got home, I looked and it turned out to be an open sore. The next day, I took her into my vet's, the needle biopsy said it was mast cell cancer.  Ceilidh had surgery to remove the tumour on her 7th birthday, 21 Jan 2010; on the same day Beckett was being neutered.  I had dropped them both off in the morning, Beckett at my vet's, then Ceilidh at the animal hospital and had gone on to work. By the time I got into the office, there was already a call from my vet's office asking if I wanted IV fluids for Beckett as one of his kidney values was high. I was pretty distraught; when I picked up Beckett that evening, the vet tech said that the hospital had called about Ceilidh and she understood then why I had a hard time making the decision about the IV fluids. Beckett was fine and Ceilidh's surgery went well too but the biopsy on the tumour came back as Grade 3, the most aggressive type of cancer and she was started on chemotherapy.  Beckett was my lifeline though Ceilidh's journey and perhaps that's why we had such a special connection.

Beckett was my dream dog, he loved to play fetch with both balls and Frisbees but Frisbee was his favourite.  He excelled (even if it's only my opinion) in agility; he helped me reach higher than I ever thought I would get. We went to the Canada Cup three times and made five finals competing against dogs some of whom had competed at world championships.  We made the podium many times at our regional agility championships and even placed in the ribbons in some events at the National Agility Championships.  Beckett achieved both Silver Award of Merit and Silver Versatility titles in the Agility Association of Canada. 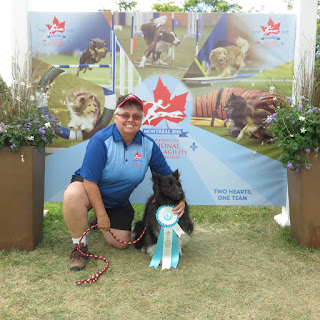 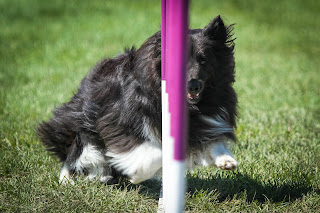 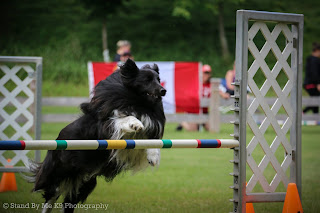 He didn't like to swim but learned to like wading in the water during our summers in Shediac and would even swim for me if I put a life jacket on him.  We enjoyed camping and hiking so he had the chance to travel to the Maritimes, to New York state and all over Ontario.  I was sure that he would be on the trip out west with me next summer but he'll be along in spirit, I'm sure. 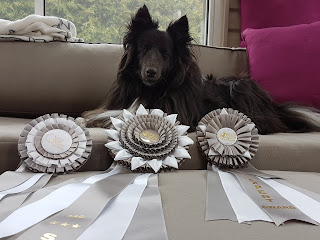 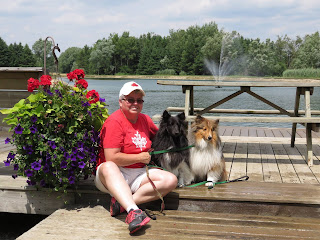 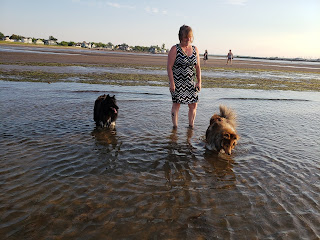 We gave herding a try when Beckett was young and he did have those herding instincts. It was amazing to see innate skills come out.  It's too bad there wasn't a place close by to take lessons, I think he would have done well in herding too. 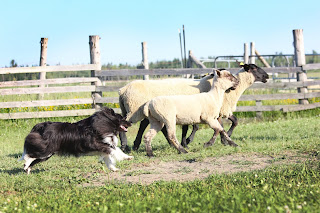 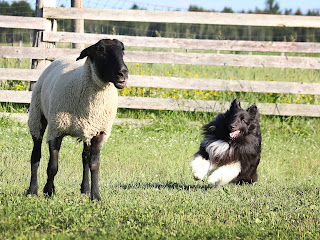 For all his drive and energy, Beckett was a very gentle dog, most people were surprised at how gently he took treats from their hands. He was also a little shy, Keltic helped him see strangers as friends. He was my Momma's boy. Most dogs look "at" you but with Beckett I always felt he was looking into my heart and soul; I had never felt such a deep connection with my other dogs but that's not to say I didn't love them.  Beckett was my heart dog, we were always there for each other.


"Joy was just the thing he was raised on, love was just a way to live and die."
(Matthew by John Denver)


Beckett, I know you loved me and you were so loved.