With so many activities still restricted I try to think of places to go with the dogs that are a different from the normal places we walk so twice recently I took them downtown. It's about a twenty minute drive and then you have to find parking but usually the walks are well worth it.

The first time we went downtown we wanted to find the statue of LCol John McCrae who wrote In Flanders Fields. This location isn't actually right in the downtown core so I had never walked this area before, there's not much public parking on weekdays in the area or not that many tourist attractions either so not as many people around. I'd only ever been to that area once before. John McCrae's statue is across the road from the building that was once Ottawa's city hall; it now houses the School of the Public Service and I had been there on a course. 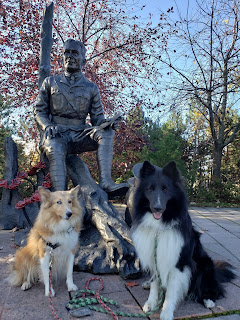 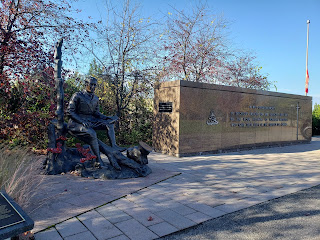 John McCrae's statue is in a small park near a memorial to the fallen of the Royal Canadian Artillery. The park is right on the Rideau River and you can see the falls from one side of the park and even walk over pedestrian bridge over the falls. 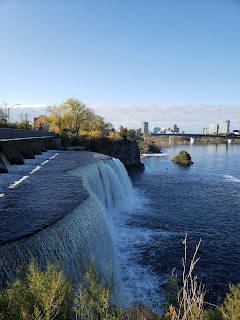 On the other side of the road and around the back of the School of Public Service I found a bridge that led across the river to another park on Maple Island. 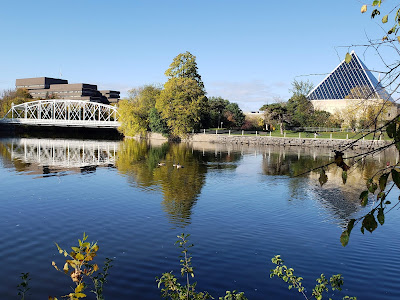 The building on the left behind the bridge is Global Affairs Canada and the pyramid shape is the part of the roof line of the School of Public Service.  The white bridge is the one we walked over to get to this little park. It's only a one lane bridge for cars so they have to take turns with a pedestrian walkway on one side. 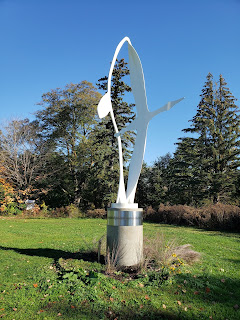 Above was a statue I found on the island suitably called Flight. Sadly as I walked around this area I found two encampments. It's probably not uncommon in most large cities but I had never seen any in Ottawa before. 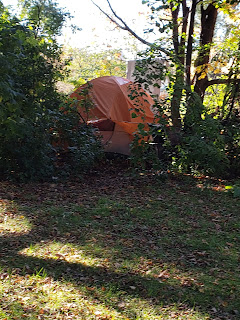 The next time we went downtown for a walk, it was to take the dogs to the Animals In War Memorial. I took Beckett and Keltic down on the day that the memorial was dedicated and one of the reporters said to me that they hadn't expected so many people to show up with their animals. It also was a good experience for both Teddy and Liam to be around so much hustle and bustle as we walked around the downtown core. The Animals in War Memorial is in Confederation Park as is the Indigenous Veterans Memorial. Initially Liam barked and barked at the dog statue while Teddy usually the reactive dog is like what's your problem. Once Liam figured things out we got a few photos of them with the war dog statue. 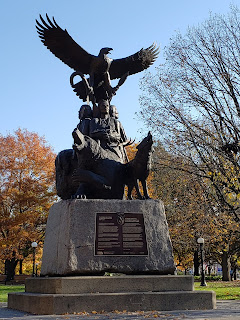 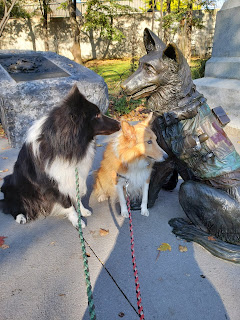 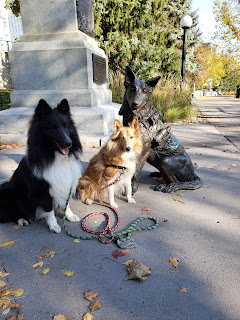 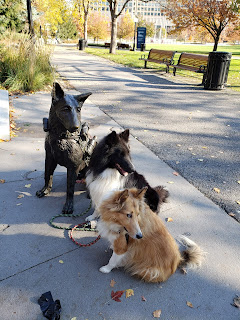 We then walked up to Parliament Hill then over to the temporary Senate where the  Women are Persons statutes are currently located, then down to the canal locks and finally around the Chateau Laurier hotel to Major's Hill Park. This was the first time in all the years I've been in Ottawa that I had gone up to Major's Hill Park.  I was tired when we got home but I don't think Liam and Teddy were. 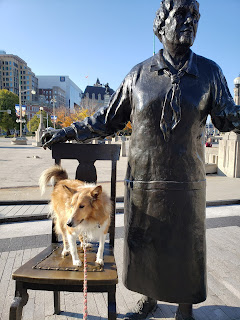 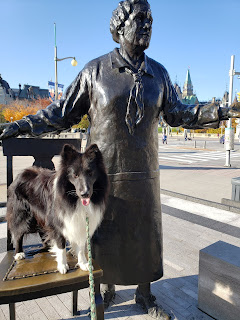 We had a nice time exploring our city on both of our outings. Sometimes it's nice to be a tourist in your home town so if you haven't been in awhile maybe you should go downtown in your home town. You might be surprised with things you didn't notice before.