Well another year into the pandemic and trying to stay optimistic is getting hard. Just when things looked like they were improving along came Omicron and we're very nearly back in lockdown. Many businesses have capacity limits again and we're being told to upgrade our masks to N95 or KN95's.  I was able to get my booster before the province opened it up to everyone 18 and over but getting tested is hard, we're told just to assume we have COVID and isolate until symptoms improve or to go to hospital if you have chest pain or difficulty breathing.

But overall it was still a pretty good year and it ended with a nice family Christmas. Well, more family than could get together last year. My youngest sister came up from Kingston and stayed with me; her husband decided not to join us. My niece and her family had moved back to her parent's place as they had their townhouse up for sale in preparation for a new job and a move to Halifax, Nova Scotia.

I invited friends to join me in decorating my tree. My sister and one of my friends did join me. I was a little late getting the tree this year. The  tree lot that I go to had very few trees left but the ones they had were still nice. For the first time that I recall, the tree lot actually closed before Christmas Eve as they had sold out. 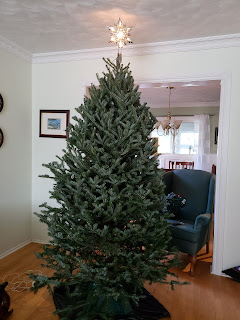 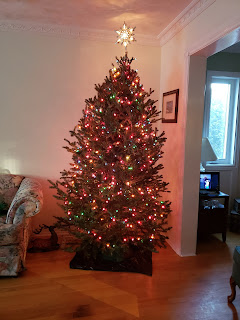 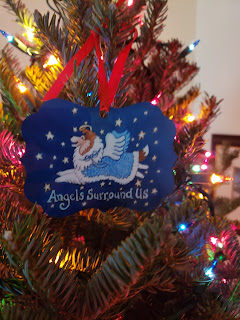 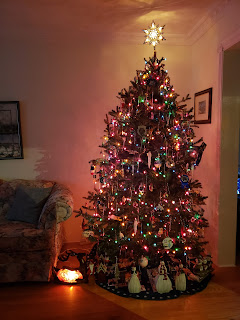 I hosted Christmas Eve. The menu was seafood chowder with cornbread, followed by meat pie and Greek salad, finished up with mince tarts and ice cream. The boys had McDonalds Happy Meals. It was nice hosting on Christmas Eve since it meant I didn't have to pack up the dogs and drive home. We just had to put on our PJs and sip another glass of wine before heading to bed. 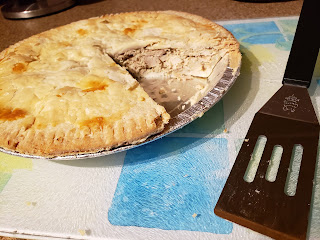 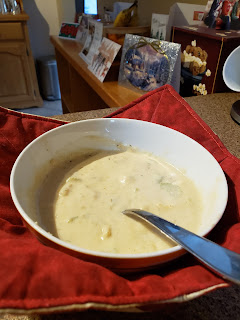 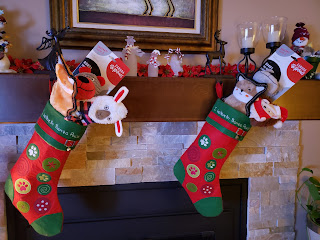 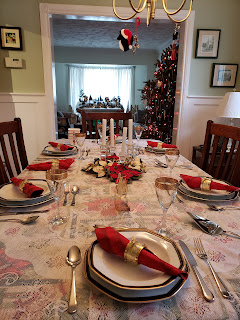 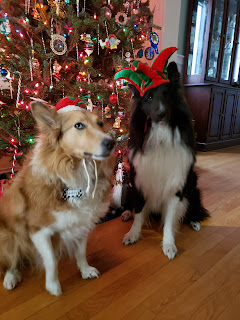 Christmas morning the dogs got to open their stockings before we headed out to my sister's place for Christmas brunch, opening gifts and Christmas dinner. 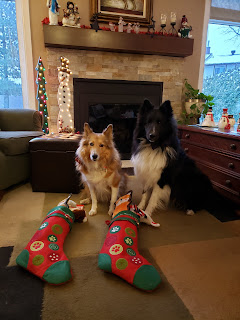 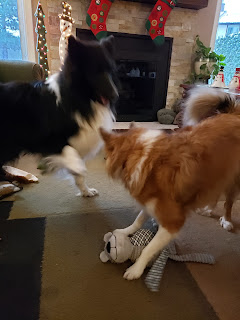 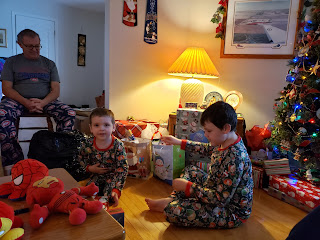 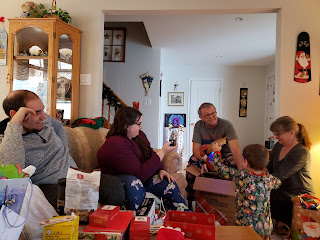 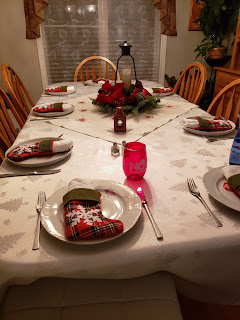 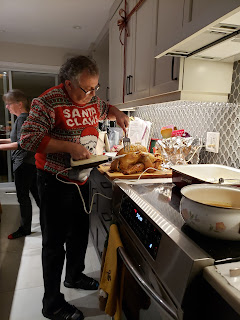 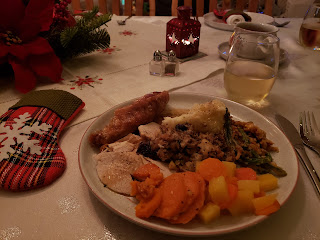 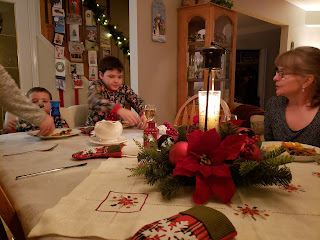 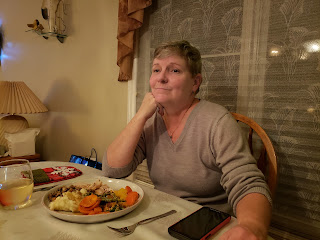 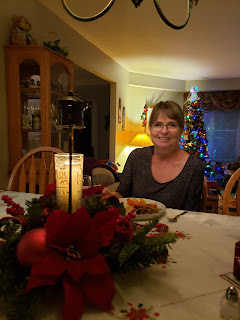 We had an enjoyable day, hopefully next year it will be more normal with less worry about getting together with family and friends but then some of us will be further apart so who knows who will be able to get together next Christmas.
Boxing Day was kind of spent relaxing. In the evening, my brother in law, my two sisters and I drove down to Parliament Hill to see the Christmas light show. After seeing the show, we all just went home and had left overs. My youngest sister and I had meat pie and shrimp with a few more glasses of wine and watched some movies. My sister left the next day and I took the dogs to an agility practice in the afternoon. 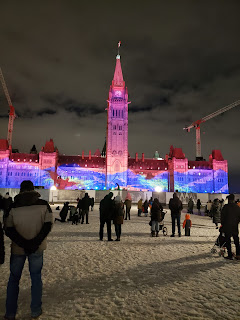 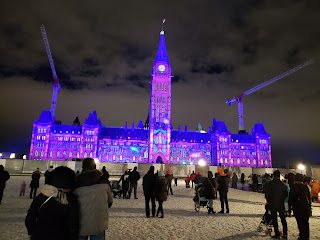 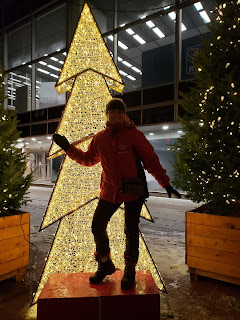 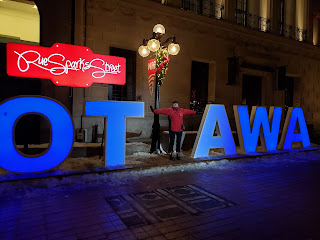 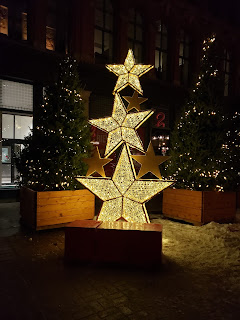 In years past I have invited a number of my girlfriends over for New Years Eve, last year I decided not to host the event but this year I thought we would be able to get together for a couple hours for a drink and a chat. But Omicron squashed that, I had hoped the surge in cases wouldn't be here until after the holidays but no such luck. I could have gone to my sister's place but I decided to stay home and have a SALY New Year's Eve. SALY is an expression I learned on one of my military postings when describing the organization of an event. It means Same As Last Year. I made myself a nice charcuterie board and opened a bottle of Prosecco. I didn't think I would make it until midnight but I did. 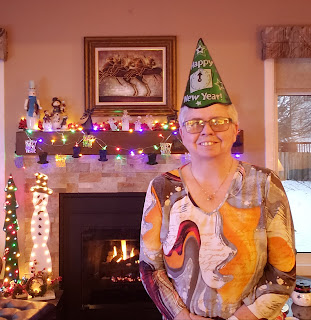 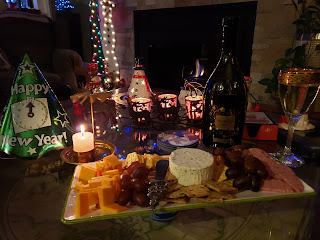 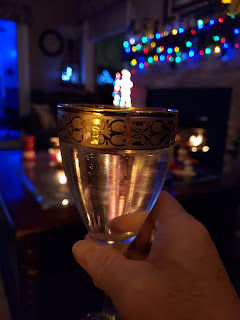 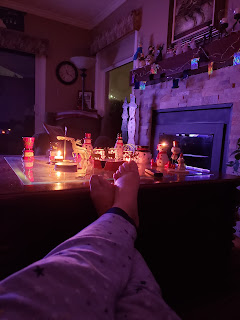 I did go to my sister's place for New Year's Day dinner. I've started taking down decorations. I don't like to do it all at once; the house feels so drab when you do that. I leave the tree up until Epiphany or Little Christmas as my mother used to call it. 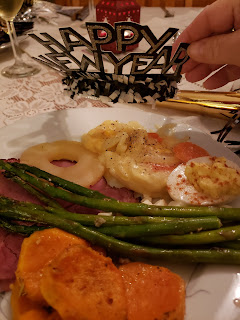 So while COVID still dominated our lives, life wasn't all bad. For me, there still was no international travel again this year but we did get out and do some camping last summer right into the early fall. Next summer, the plan is to go west to Alberta with my youngest sister and her husband. No one in the family has yet to be sick with COVID. We welcomed to new family members, two little great nieces with another one on the way. I was able to continue with agility classes with Teddy and Liam. Teddy was able to get three Jumpers Qualifying scores in the two trials that we entered. Liam will be old enough soon to compete but we're going to hold off entering any indoor trials until the positivity rate comes down. Hopefully we'll be able to enter some outdoor trials before we start our summer trip.

So I'm grateful for all I have and am looking forward to 2022 being a much better year.