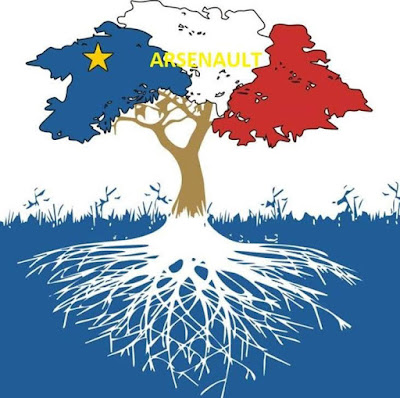 My father passed away in 2011 and my my mother last year so when I heard there was to be an Arsenault family reunion (in conjunction with the Acadian World Congress) on Prince Edward Island, I knew I had to go. One of my sisters had written me a letter after our mother died and it said "You have come to fill the role of family patriarch".  I don't have any descendants and I think I just needed to make those connections with my roots, to belong, to be part of a bigger family.

So as my sister lives in Prince Edward Island (PEI), the two of us went to the family reunion.  We made a poster of our family as was suggested by the organizers. My maternal grandmother is an Arsenault, with Arsenault ancestors on both sides of her family but it turned out that my maternal grandfather's mother is also descended from PEI (Ile Saint Jean) Arsenaults. 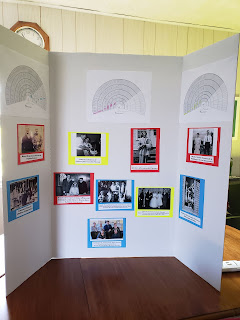 We attended a number of presentations about the Arsenault family at the reunion. I went to one before the reunion where I learned that my maternal grandather's family, the Pineau's are not Acadians even though the family name does show in the Acadian Museum in Miscouche. The Pineau family was not in Acadia at the time of the deportations by the English. 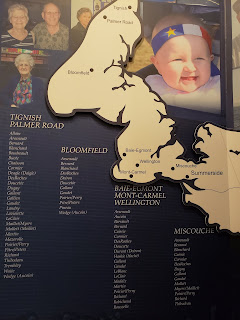 The Arsenaults however were there almost from the time that Acadie was founded. My seven times great grandfather Pierre Arsenault was a coastal pilot in what is now Nova Scotia and he founded Beaubassin (now called Amherst) with Jacques Bourgeois.  It is from him nearly all the Arsenaults in Canada are descended.  There was another Arsenault who settled in Quebec around the same time as Pierre Arsenault but he (Francois Arsenault) only had two sons whereas Pierre had seven sons so he has many more descendants. 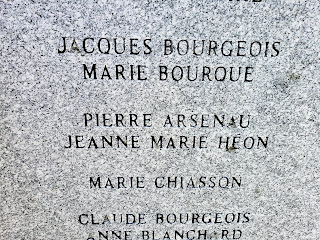 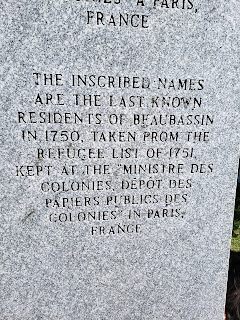 Having the last name Stewart and having been raised in Central and Western Canada, my brother, sisters and I didn't embrace our Acadian ancestry and I suppose it didn't help that we didn't speak French either.  I now understand that that our Acadian heritage is a rich history of struggle and triumph; we haven't just survived but have succeeded in carrying on the legacy of our ancestors, continuing to move forward, while not dwelling on the past.  I guess that is the same for my Scottish heritage as well.

The reunion was fun. I was astounded to think that everyone in the arena (with the exception of spouses) was related some how to one man.  They said afterwards that over 1000 people had attended the reunion. The first night there we met one of  my mother's first cousins. She and her daughters had been sitting at the same table, unbeknownst to us, as my sister and me. She came up to my sister and asked if she wouldn't rather sit so she could see the stage. She then asked me who I was, which was a common question at the reunion. I told her I was a granddaughter of Edmund Pineau and Louise Arsenault. She came around the table saying "Ma Cousine" and gave me a big hug; her mother was my grandmother's sister.  Over the weekend, we met other cousins of my mother as well as some second and third cousins.

My sister and I also explored the area near Mont Carmel where our grandmother Louise was from. We found at the Notre Dame de Mont Carmel cemetery, the grave sites of our great grandparents (Phillipe and Ursule Arsenault) and our great great grandfather Victor Arsenault.


Also interred there are my mother's uncle Reverend Adrien Arsenault and her aunt Beatrice Arsenault.

The link above gives a little of the Acadian Arsenault history in Canada.

This link gives the Arsenault geneology from Paul H. Arsenault and his two wives. This Paul was a great grand son of Pierre Arsenault.

So for my Arsenault ancestry, I am:

I'm doing more research on my family history now and with the internet it has been made much easier than it was in the past but my advice to anyone who wants to know their family history is speak to your parents and grandparents, then write down those stories and the details that they tell you about the family history.   The family stories get lost so quickly.

Now I have made connections to the past, they are a part of me now but I suppose they always were.
Posted by Helen at 8:24 PM