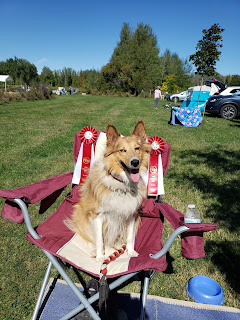 Yesterday, Teddy was entered in his very first agility competition. I wasn't going to enter him in any competitions this fall but recently one of the trial hosts decided not to do any indoor trials until things improved with COVID so when I saw this Jumpers trial hosted by the Ottawa Valley Border Collie Club I decided to give it a go.

I hadn't been to this agility venue, Dogz, for quite some time. I looked up the directions on my tablet and it said it was about a 50 minute drive (it probably is in traffic) so I planned to leave at 7 am. When I put the address in my car's GPS on Saturday morning, it gave me an estimated time of only about 30 minutes. Needless to say I was the first one there and had lots of time to set up and walk the dogs.  It was a glorious day for agility, cool but not cold with just a light breeze.

I knew there would be people there that I knew and so I hoped that I would be able to get someone to video Teddy's very first runs. Luckily, a friend who was running her dogs in later events, arrived early and she was able to video for me. It's always easier when someone isn't worried about their dog's run. It was my first competition in 2021, my last competitions were with Keltic last Sep, hopefully it won't be another year before we can do another competition.
Teddy did great. I was really rusty in the first run and it wasn't a nice flowing Starter's course. I thought I caused Teddy to fault the first tunnel and one of the jumps but apparently since he didn't have any backward motion (Sheltie spins are backward motion) he wasn't faulted.
Teddy - Starter Jumpers 1 Video

Teddy isn't the fastest Sheltie out there but it seems like he'll be a steady agility partner,  like Tucker, he'll probably rack up the qualifying scores once he can run as a Veteran dog.

The second run was much smoother for us. I got in all the crosses I had planned unlike in the first run. Teddy ran in one more event, the Steeplechase. He's only seen the A-frame in class once so I wasn't sure what he'd do. He did it alright but he stopped in the yellow, when I asked him to target he jumped off then got right back on again so we were eliminated. He did do all 12 of the the weaves though and didn't knock a single bar.

With the two Starter Q's (qualifying scores) in Jumpers, Teddy now moves to Advanced in that event. So with good weather, a chance to see friends and play some agility; I'd say that all in all it was a pretty good day.