Last week, my youngest sister, her husband and I went to Fitzroy Provincial Park. Fitzroy is only about an hour or so from Ottawa. Since we are all retired we went during the week arriving on Monday and leaving on Thursday. I was surprised at how quiet the campground was since it is just mid summer although we weren't in the campground nearest the beach so I'm sure that helped.

We were to convoy up to the park but after getting through the city (and running a red light) I lost them at an intersection when I had to let the oncoming traffic go ahead of me.  Once I found the signs for the highway, I just went my own way. We arrived at the park virtually at the same time.

At my site, the power post was set way back and I didn't have a long enough cord to reach it if the trailer was parked on the gravel pad so my brother in law moved the trailer over nearer the fire pit. Since they had the next site, it wouldn't matter if we couldn't use the fire pit on my site. We got our sites set up and prepared to have a relaxing few days. 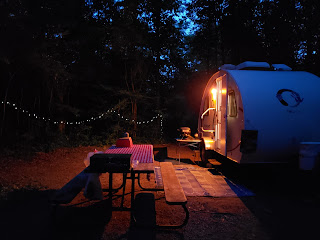 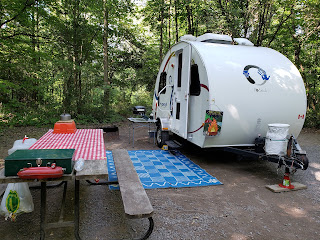 We had planned some great meals Mexican corn and shrimp, salmon and asparagus, baked apples with vanilla ice cream and pizzas were the three dinner menus that we had planned.  The shrimp and salmon dishes were foil packet dinners, the best way to cook when camping.  The shrimp dish was excellent. You don't really need all the peppers that are called for and I'll bet you could feed more than four if you had sides. We just had it with tortillas and ate it like you would fajitas.

We didn't do any real hikes just some walks around the campgrounds and checking out the better sites.  We decided in the Pine Grove campground, site 4 was the best non-serviced site as it had river access with a flat rock ledge that you could use as a patio and, for me, site 53 was the best electrical site, not too close or too far from the washrooms and an easy site to back into.  We were in sites 49 and 52 which weren't really bad either. We enjoyed some nice fires at night. 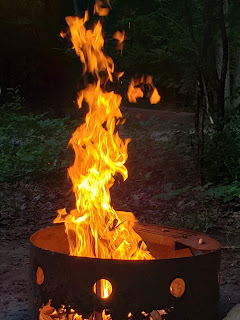 The second day we did drive into the town of Arnprior to walk around a bit. The town does have a nice little down town core with antique shops and restaurants. 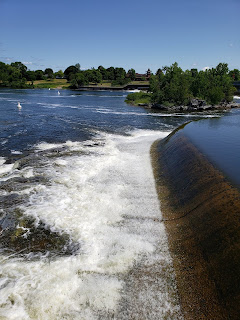 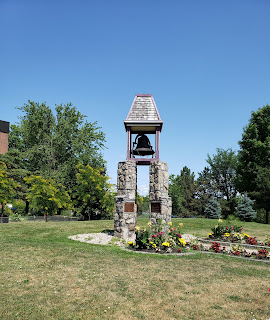 I think the dogs enjoyed both the trailer and being outdoors.  Beckett is now at the age where I don't need to tether him, for the most part he just stayed on the camp site. Keltic, on the other hand, was antagonized by red squirrels, chipmunks and plenty of grackles.


All in all it was a nice little trip, I bought 30 amp extension cord as soon as I got home. Hopefully with another 25 feet of power cord I will always be able to reach the power post.  I head off down east for my long solo trip this coming Saturday. I've broken the trip down into segments so none are really all that long. I also upgraded my CAA membership to include the RV as I can't imagine changing the tire by myself.  Crossing my fingers that nothing like that happens and that it is a good trip but more about that in future blog posts.
Posted by Helen at 2:27 PM