This past weekend Keltic and I went to our first agility trial for 2020. There were lots of hugs from friends in the agility community and a few tears too.

Keltic has had the worst luck in Master Jumpers, having had many runs with only one refusal or a bar down. I thought with Jumpers being our first run and not having done much practicing over the holidays that he would be wild.  I'm sure Beckett was there in spirit and helped out sending us positive vibes for a clean run. 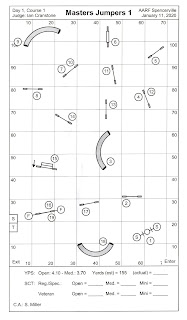 We stepped to the line prepared just to have fun.  Even if Keltic didn't let me lead out as far as I would have liked, I still got my blind cross in between obstacles 3 and 4.  It wasn't a perfect run by any means but all the bars stayed up, there were no refusals and I remembered the course.  The standard course time for medium veterans was 55 seconds, Keltic finished the course in 36.01 seconds. A time that would have made Beckett proud and so Keltic got his first Master Jumpers Q in his first trial and first run after his brother went to Rainbow Bridge. It was like Beckett said to Keltic and me, "Here is a gift of a Q for you!" Tucker and Ceilidh both sent rainbows to Beckett but that's a little hard to do in the middle of winter. 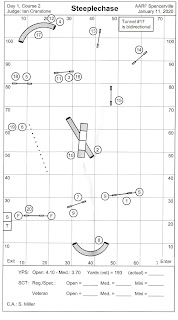 The next run was Steeplechase, Beckett's favourite event.  I had to blind cross the tunnel after obstacle 4 and 17 to try and get Keltic to do onside weaves. He's better at onside weaves than offside; it didn't help, he still didn't get the entry but weaves are judged at Starters level in Steeplechase so all we were losing was time. I sent him into the weaves again, the first time he did all 12 weaves, the next time through he popped at 10 and I had to get him to do the final two poles.  Again we had no bars down, no missed contacts but I thought we would be over time.  Surprisingly, Keltic got another Q. The standard course time for medium veterans was 70 seconds, Keltic finished in 65.65 seconds, close but still under time. 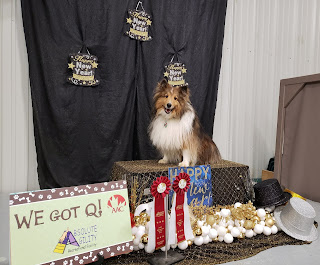 So the agility season of 2020 has started off well, hopefully that will carry over to Regionals in the spring and Keltic will qualify for Nationals.