So as many of you know, I lost my wonderful Beckett in Dec, right before Christmas.  My heart was torn up, but you know I knew even then that a puppy would help me heal.  I desperately wanted another bi black Sheltie.

In early January, some friends contacted me about a Sheltie they needed to rehome, I told them no as I was looking for a bi black.  I had contacted two breeders both of whom were supposed to breed in Jan or early Feb but those breedings didn't take place. I then found a seven month old sable puppy in the Ottawa area that was available but then I started to think.

I still wanted a bi black puppy but did I want to go through the puppy stages twice. I mean puppies are fun but then there's the housebreaking, the chewing and all the other not so fun stuff that goes with raising a puppy.  So I thought the dog my friends had might be a good choice.

Teddy was born on 6 Apr 2017.  He was purchased at a pet store in Quebec, which at one time was Canada's puppy mill capital. The province brought in stronger animal protection legislation in 2015 to help that but I guess selling puppies in pet stores was not part of it.  He was sold as a Shetland Sheepdog and I'm sure he is mostly Sheltie but he has no papers and the first owner (my friend's cousin) was the one who had him microchipped, that would or should have been done by the breeder.

I don't know why the cousin couldn't keep him but my friend's daughter ended up with him sometime last summer. She, however, lives in an apartment and found taking him out was a bit of a hassle so that's how my friends ended up with him. My friends were already thinking about a trip to Ottawa so when I called them to see if they were still looking to rehome Teddy, they decided to make a week of it and came to visit some other friends as well. They spent two days at my place so we could see how Teddy and Keltic got along as, of course, that was the first hurdle.  They get along just fine, no fighting over food and they walk together pretty well.

They don't play together, maybe they never will. Teddy likes vinyl toys and doesn't seem to care much for stuffed toys. Keltic has tried to get Teddy to tug a stuffie with him but Teddy doesn't know what to make of that. 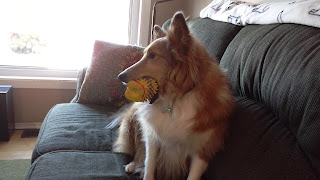 Teddy couldn't or wouldn't get on the couch when he got to my place and wouldn't do the stairs either but once I saw him get up on a snow bank I knew he was able to do it.  As you can see, he's learned to get on the couch and he goes downstairs quite easily now, he still needs some encouragement to go upstairs but he will go up on his own now.  He had a broken right hind leg when he was younger so that may be part of his reluctance to do stairs.

Teddy has one blue eye, it's got a little bit of brown in it. He always looks like he's giving you "Sheltie stink eye". 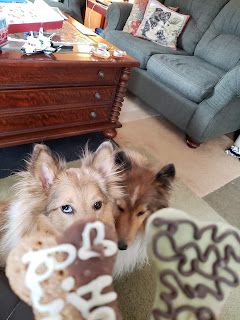 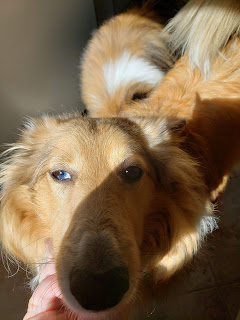 He was supposed to be here for a couple months trial but with the craziness going on that trial will likely have to be extended. I had booked a vet appointment for him for a health check to make sure he'd be safe doing agility and I was going to take him out to the training facility we go to so that I could make sure that he would be physically able to do agility.  Of course, both my vet's office and the training facility are closed.  I have taken Teddy into my training area in the basement and he learnt to do a jump already but I wonder a bit about the teeter and the a-frame what with his stair issues.

So we'll see how things go, I'm thinking he'll probably stay.  And a breeder I know in the Ottawa area contacted me just days ago to say that she is breeding her dog to a bi black Sheltie so who knows there might be a puppy in the future too.