So in this crazy time, I have lots of time at home so I decided to paint my outdoor agility jumps.  I bought most of them off eBay many years ago and have always taped them which had to be done every other year.  I'm hoping the paint will last longer.

I did an online order at Home Depot for paint and coloured electrical tape. I had to wait nearly three days for the order so luckily this wasn't urgent work.  I ordered this spray paint in red and black as it said it adhered to plastic so we'll see. 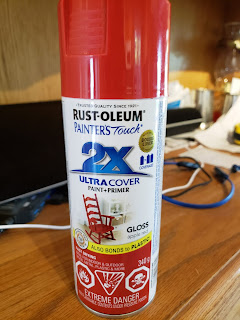 It was hard to get the the old tape off. In some cases I just gave up and painted over the remnants of the tape. The jumps look fine from a distance but up close they're a bit messy.  I also retaped my tire too but didn't have enough tape to do a really good job of it. I also learned that it is hard to mask off the jump bars to get nice lines, the paint bleeds under the tape.  On the last jump bars I did, I masked them first with electrical tape then paper and painters tape which worked a little better. 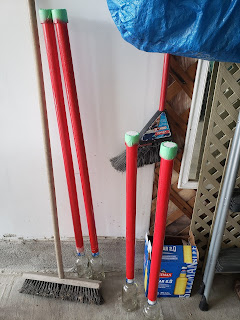 I worked out of the garage, making a little spray booth with a garbage bag and my saw horses. It worked pretty well, there's spray paint on the garage floor but does it really matter.  Once I had spray painted the first of the uprights, I realized I couldn't lay them down on the floor so I have to come up with a drying rack. I used beer bottles for that.

I had a little blood shed doing these jumps when I pinched my finger trying to get the jump cup off of the upright.  The PVC is sharp where the joint has been cut. It's not as bad as it looks, at first, I didn't even think that it had broken the skin but then it started to bleed.


We set up the back yard with the newly painted jumps. As I was painting the jumps, I realized that red, black and white had been Beckett's colours so I re-dedicated the backyard as Beckett's Field. 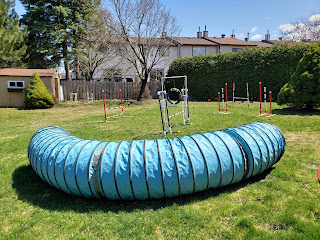 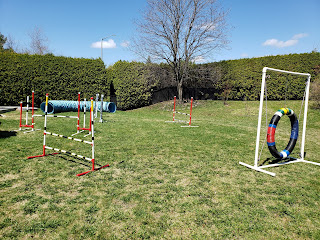 No one has yet to run in Beckett's Field, the Agility Association of Canada (AAC) has started a virtual Jumpers League. Keltic and I ran two events last weekend before I had painted the jumps.  The link below is to our run on the second event we did. The AAC hasn't put out anything yet on the next event.  Last week was free, the next time you have to pay to see the courses and, if you want to have your run judged.  Pretty neat what we can do with today's technology.

I ordered a new rubber skin for my teeter just before the lock down happened. I haven't received it yet but they said delivery was six to eight weeks, hopefully by then my brother-in-law will be able to help me re-board the teeter.