Well, instead of traveling out West for agility nationals and to visit with family, I'm taking a few camping trips close to home. The first one was just to a provincial park called Rideau River, that's only about an hour away from my house. Two of my sisters and their husbands also joined me.  We had three sites side by side.  The middle one that my youngest sister had was quite private as there wasn't a site directly opposite it on the other side of the loop. We had our campfires there and most of our meals. My site was a corner site, I booked it so that if I wasn't able to back in I could just drive through.  I was able to get my trailer backed in; it just took awhile, like half an hour. 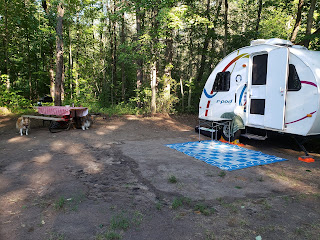 We were only spending two nights so I arrived just after 1 pm, if your site is available they will let you check in early. We all had a hand in planning the meals. I did dinner the first night. It was garlic Dijon salmon with shrimp, boiled potatoes with dill, garlic butter and sour cream and a salad. I had planned a dessert too but we were all full just with the meal. Even though we've had dry weather, there's been just enough rain that there wasn't a fire ban so we enjoyed a pleasant evening around the campfire. 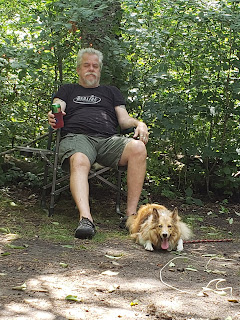 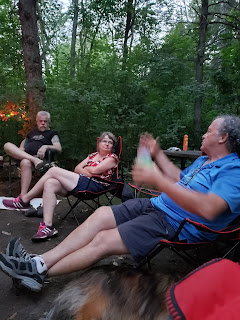 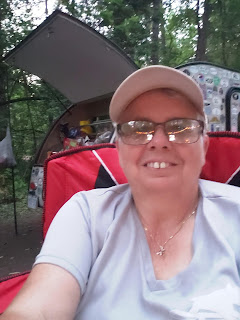 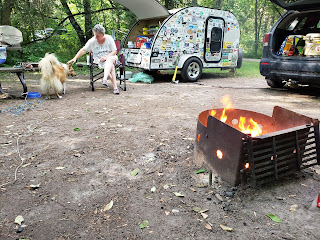 The next day breakfast was ham and cheese croissants, my sister Juanita was in charge of both breakfasts.  After walking the dogs, we ladies went for a swim to cool off.  The showers at all provincial parks are closed this season.  There's not too much at Rideau River but it does have a nice little sand beach and picnic area.  The beach was only about 750 m from our camp sites along a shore line trail. Steve stayed back at camp with the dogs. After our swim, Maureen and Steve drove to the nearby town for ice and bug spray as they had run out and the mosquitoes had been bad the first night. Lunch when they got back from town was naan bread pizzas.


A friend who lives close to the park came over in the afternoon to visit with us and we just spent the afternoon imbibing and chatting.  Maureen and Steve were responsible for supper that night and they made a foil packet sausage and vegetable dinner.  I put together the dessert that I planned too; it was a foil packet peach and pineapple upside down cake served with ice cream and whipped cream.

Again we enjoyed a lovely camp fire. The weather the last morning started out beautifully; they were calling for rain, we thought maybe the rain had bypassed our location but then the clouds rolled in and just as we were sitting down to eat our breakfast quesadillas and sausage, the rain started.


Luckily it didn't last long and it was still warm so things dried out fairly well before we had to pack up.  I had a few things that were damp and bit sandy that had to be cleaned off once I got home.

I think this was Teddy's first camping trip, I think he enjoyed it.  The next time we'll find a trail and take a nice long walk, he'll enjoy that. 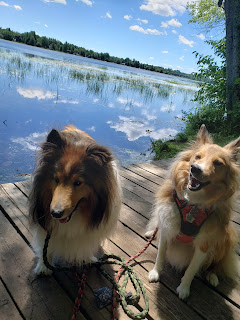 The next trip is to Murphy's Point Provincial Park which is just a little further away. It's bigger and has some nice trails and walking paths we can do.  There's also an old mine; I doubt the mine will be open since the parks are keeping most things closed, even boat rentals, but maybe you can still walk around the grounds.