Well, the little dog who could, came out to play agility this weekend. We went to our first agility trial since the lockdown this Saturday. There were many precautions like you had to wear a mask except when you were in your own crating area or when you were running your course, no spectators were allowed in the park, and there was hand sanitizer everywhere.

The trial site was over an hour away, an hour and forty minutes according to my GPS so we left the house at 5:40 am as our first run was to start with the walk-through at 8:15 am. Well, there's no traffic at that time of day and we arrived at ten after 7 but that gave me time to leisurely set up and to walk all the dogs.  The weather forecast was for a sunny and warm day so I just brought my beach shelter and sport umbrella. 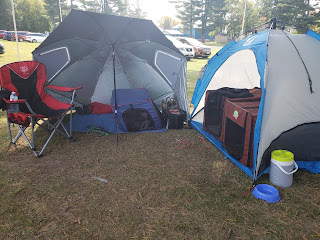 I had entered Keltic in two Jumpers runs and one Standard run. First up was Jumpers, he needed one qualifying score for his Master Jumpers title. I liked how the first course walked and I thought that if Keltic would just run we would have a good chance but since we hadn't run since March, other than doing the Fun At Home League that the AAC had started, I wasn't sure what he would do. 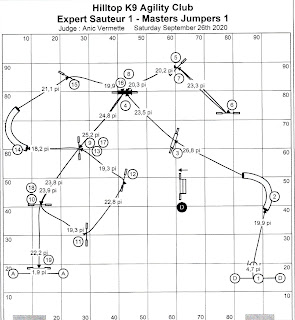 I wasn't sure I could lead out with the tire as the first obstacle, so I didn't; but I still got to the end of the tunnel before Keltic came out and so got my cross in. The run was going really well until the tunnel at 14, I heard Keltic fall inside the tunnel, I was sure he was going to come back out the same way he went in but he didn't, he just came out walking.  He looked fine and when I called to him he started to run again so we went on to finish. Keltic did the course in 41.3 seconds, the allowed course time for medium veterans was 50 seconds, so there it was his Masters Jumpers title. There's no video of the run since I didn't want to give my phone to anyone. 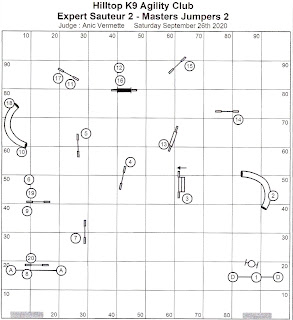 Our next run was also a Jumpers, again Keltic ran really well. I was late doing a front cross on jump 12 and Keltic came around with me but we were well away from obstacle 13 so once I got him back on the right side of me, we finished the run for another qualifying score, a "Q" to spare. Keltic finished this course in 44.46 seconds, the allowed course time was 55 seconds. He actually made the Medium Regular time of 46 seconds but then again he's only jumping 8" rather than 16".  I still thought he was running well. I had been thinking of retiring him, maybe all he needed was a rest. Anyway, there are no indoor trials this winter so we'll see what happens next Spring.

Our last run was a Standard, Keltic again ran well and I was really happy with the run as he did all of his weaves and never argued about doing the entry, unfortunately we had an off course tunnel. 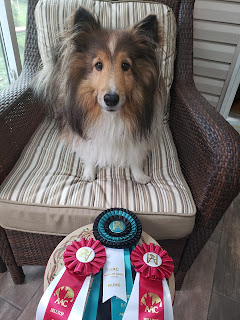 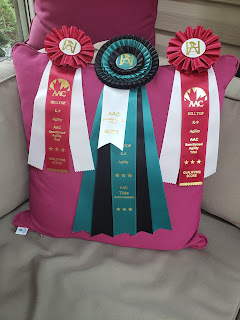 So the dog I thought would never get a Masters title, now has two.  We'll see what next year brings.

This trial was hosted by the Hilltop Agility Club in memory of one of their life members, Pat DeRonde, who sadly passed away in July. 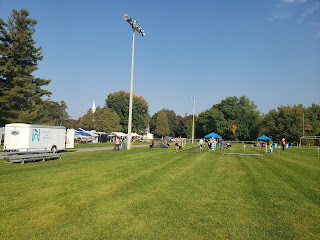 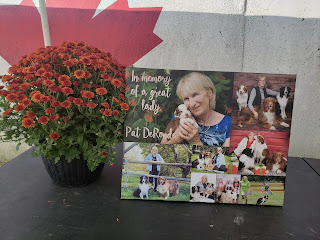 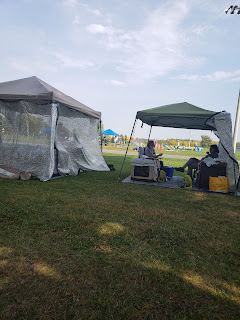 Liam and Teddy had a good time walking around and enjoying hotdogs and other treats. Both were very good in their crates. Liam enjoyed meeting many other dogs and even some puppies. We had an awesome autumn day, it was even a little too hot by lunch time, but that's far better than being cold and wet.  One more trial this weekend and that's it for 2020. There's no titles on the line so we'll just go and have some fun. Our runs are later in the day and the trial site is closer so it's not another early morning.