Last night was Robbie, sometimes pronounced Rabbie, Burns Night, so I decided to have a Burns Night dinner. I've never actually been to one, I don't care for haggis or for scotch either so I doubt I'd ever go to an actual dinner. I do like some of Robbie Burns' poems though.  I'm sure most of us in North America and much of Europe, I would think, know Auld Lang Syne but the first poem of Robbie Burns that I can recall that I really liked was My Heart's in the Highlands.

I found a blog post that had a recipe that stacked mashed potatoes and mashed turnip (rutabaga to some of you) on a slice of canned haggis and I thought I could do that but without the haggis. I had some pork sausage and some hamburger that I mixed together with some dry onion soup, cinnamon and nutmeg.  The blog post used the haggis can to build the stack and then pushing the stack through. I couldn't get the bottom of a can cut off so I decided to use the silicone rings I have for cooking eggs. It worked rather well. I only had mini potatoes so had to do a rustic mash for the top. 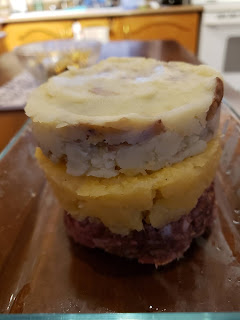 This haggis, neeps and tatties stack is served with a whiskey sauce. I wasn't sure I had Scotch but it turned out I did have a couple small bottles. Neeps and tatties are Scottish slang for turnip and potatoes. The sauce was more like a gravy and consisted of sauteed onions, beef broth, whiskey and cream. It was very good. 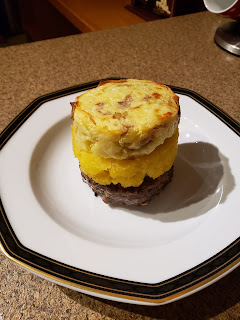 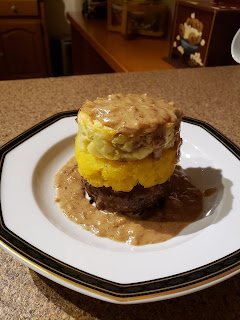 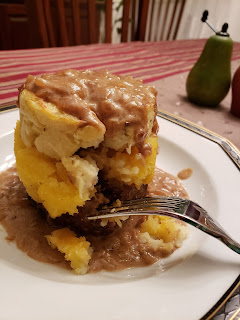 I decided to make this a fancy dinner night so I set my table and got myself dressed for the occasion. I had no tartan to wear so I fashioned a sash to wear with my dress shirt with some pins I got in Scotland set off with a brooch that belonged to my mother. The sash is actually a pashmina that Amawaterways presented to each of the ladies at the end of our river cruise. 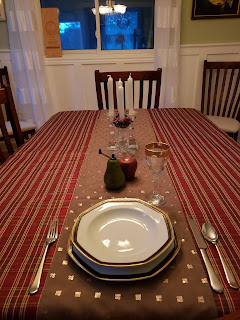 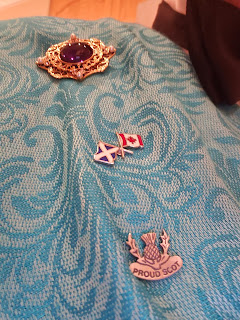 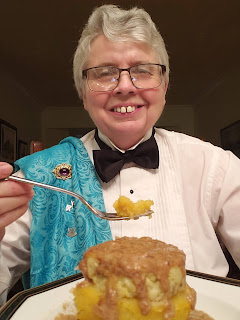 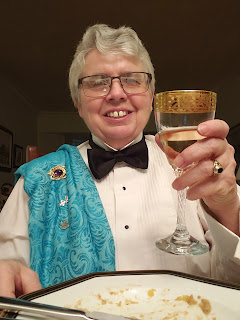 The wine was from Chile, I'm not even sure they make wine in Scotland. I know there are lots of distilleries.  Anyway I thought the name of the wine sounded somewhat Scottish. 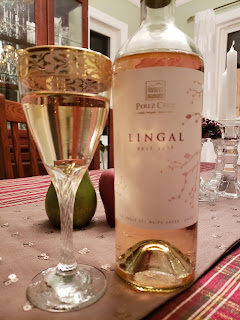 I also made a Scotch Egg that I had for lunch today. It wasn't bad, I overcooked it as I wasn't sure how you would tell if the meat was cooked all the way through. It was pretty good; someday I'll have to try a real one. They are supposed to be deep fried but the recipe I used was for a baked Scotch Egg.  Mine split at the bottom, perhaps I could have turned it while it cooked. 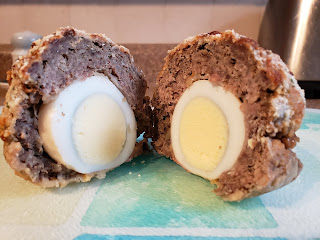 Burns has a poem that is somewhat fitting for these pandemic days called A Man's a Man for A' That. The last verse is especially appropriate.
Then let us pray that come it may,
(As come it will for a' that)
That Sense and Worth, o'er a' the earth,
Shall bear the gree, an a' that.
For a' that, an a' that,
It's coming yet for a' that,
That Man to Man, the world o'er,
Shall brothers be for a' that.
Posted by Helen at 2:49 PM